At the avant-garde of building science there is an increasingly lively debate around the correct wall assembly to manage vapor diffusion. The conversation, though dense and complex is important because vapor diffusion and more broadly moisture management are crucial components of a properly built, healthy home. This topic is often misunderstood and even ignored so in this week’s blog we demystify vapor diffusion and explain how Havelock Wool fits into the equation. 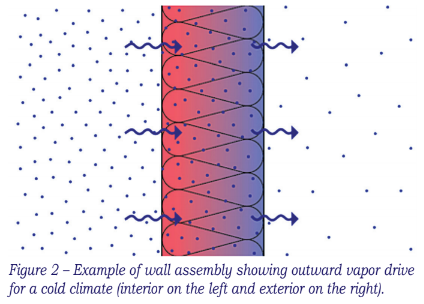 What is Vapor Diffusion? How Does it Work?
Vapor diffusion occurs when water molecules move through a surface due to differences in vapor pressure. Vapor diffusion typically moves from high to low pressure i.e. the warm to cold side. If it’s cold outside, this means vapor diffuses from the warm air inside of the house to the colder outside of the house. In warmer climates, the reverse holds. However, it’s important to note that vapor diffusion can reverse. For example, the sun warming the exterior of a home can drive vapor back into a house.

What about vapor barriers?
The building industry goes to great lengths to control vapor diffusion. Less vapor is less condensation which is less mold, mildew and overall mess inside your wall. So vapor barriers and retarders are typically used in conjunction with insulation to control this. Depending on how much you want to TRY to control vapor, one uses a permeable (barrier) or impermeable (retarder) material.

Issues with using Vapor Barriers
The placement of vapor barriers is crucial. As mentioned before, vapor diffusion can reverse which creates a problem when a wall assembly is designed to deal with only one direction of diffusion. If on the wrong side of a wall or on both sides of a wall, a barrier traps moisture which creates excessive condensation and can easily lead to mold. Not good.

And it’s important to note that vapor diffusion isn’t a bad thing as it also allows a wall to dry out (referred to as vapor diffusion drying). As we’ve written before, water is going to get into your wall cavity, and its ability to breathe and dry is crucial to avoid condensation, mold, mildew, etc. Vapor barriers while limiting vapor also can limit the drying out of a wall assembly.

Finally, vapor diffusion isn’t the only way your wall assembly accumulates moisture. Air leakage is a separate phenomenon and often creates more condensation more quickly. A (traditional) vapor barrier is not designed to be an air barrier. So despite best efforts with a vapor barrier, water will still penetrate a wall.

How does Havelock Wool fit into the equation?
Havelock Wool insulation addresses both vapor diffusion and the issues with vapor barriers.
One of wool’s greatest strengths is its ability to manage moisture. It heats up when it absorbs moisture which helps maintain its R-value despite being wet which in turn helps it dry out quickly. Equally important is a wool fiber’s construct. It is a keratin and therefore will not support the growth of mold. No other insulation medium can make these claims. So when water enters your walls be it via vapor diffusion or air leakage, wool responds dynamically.

We do not recommend a vapor barrier when insulating with Havelock Wool. A barrier can, and a retarder will impede the drying of the inevitable moisture in your wall cavity. Indeed the building industry admits (when asked!) that walls without vapor barriers can perform quite well when it’s drying ability exceeds the wetting. Havelock Wool, thanks to its moisture management, does just that. So with our insulation, you can avoid the issues of vapor barriers. Should you go the vapor barrier route, there are good options for ‘smart’, or variable membranes that will achieve the efficiency of airtightness while not disrupting vapor drive. See our blog post here about Air Barriers and Vapor Barriers

Our overall recommendation remains to keep informed about the materials in your home and the important evolutions in building philosophy and methodology. We hope you agree that Havelock Wool is part of the solution but if not, we’re happy to at least assist in making informed decisions.

To that end, we can not stress enough the need to self-advocate. The trade is under-informed if not misinformed on many of these matters and unfortunately you, as the occupier of the space, are left holding the proverbial bag when things go wrong. If you get it right at the start these headaches can be avoided.

As ever, thanks for reading along, and please reach out with topics of interest.